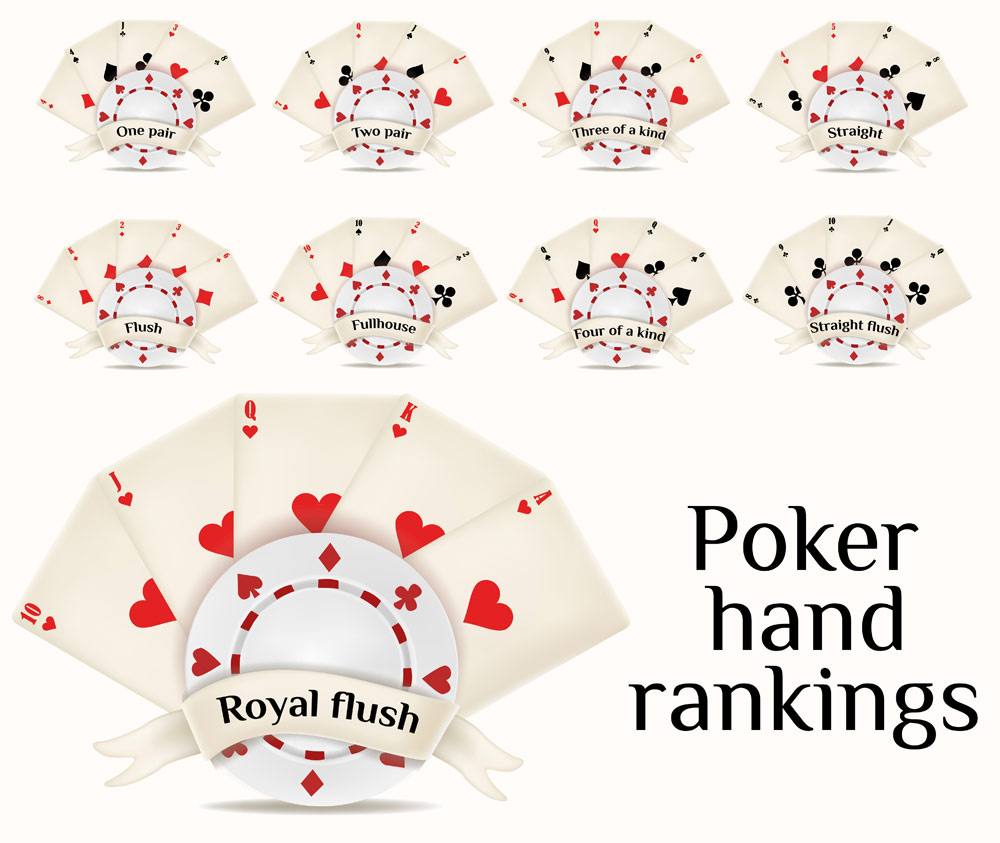 We are all aware that poker is just as much of an art form as it is a “soft” science. While the skill of the individual obviously comes into play, the simple fact is that it is the strength of the hand that will ultimately separate victory from defeat. Many will argue that this is the most difficult concept to grasp, as there are a number of hands that will occur during every competition. Let us therefore take a look at common poker hand rankings in order to provide a concrete representation of the available possibilities.

In order to develop a solid online poker strategy, it is first important to understand some of the top rankings. For the sake of brevity, we will list the most potent immediately below:

Keep in mind that these combinations can be difficult to achieve and that it will take a good amount of experience in order to recognise when each should be built. Let us now take a look at how poker hands are rated. We will focus here upon some common situations that tend to occur during normal hands.

Online Poker Hands: Knowing the Good from the Bad

Online poker strategy partially involves knowing the signs that you have a potentially winning hands (while also determining what others may be holding). For instance, let’s imagine for a moment that you do not have any of the combinations mentioned above. In this case, the value of your hand will be determined by the highest card. If you are holding an ace, this is referred to as an “ace high”. An ace high trumps a king high. In the same respect, a king high is valued more than an opponent who holds a single queen.

However, what happens if two players hold an equally high card? In this situation, the competitor with the second card of the highest value will win. If each displays a king-high hand, the one holding a queen will triumph over the other possessing only a jack. This same principle continues down the line into numerical cards.

If a player is able to create a hand that contains two cards of the same value (such as two seven), he or she holds a pair. A pair of aces is considered the highest in regards to a one-pair hand. If both players hold a pair of aces, the result will once again be determined by the next highest card.

There are also times when a player holds “two pair”. This is simply two separate pairs of cards within a hand (a pair of sevens and a pair of jacks). As you would imagine, these poker hands will be ranked based upon the value of the pairs. Two aces and two kings are higher than two kings and two queens. As always, the same strategy of descending values will again apply.

Three of a Kind

Three of a kind is another common hand that will be encountered from time to time. This hand consists of three cards of the same rank (three kings, three twos or three tens). The value of the cards will be taken into account. Three aces will trump three kings, and so forth. It is important to note here that two players cannot hold equal cards that are three of a kind (each suite contains only one value of each card).

When Experience Comes Into Play

The good news is that understanding the basic principles involved with online poker in terms of rankings is relatively straightforward. The real challenge is to recognise the beginnings of a potentially winning hand. This takes time and experience to master. For instance, players who are dealt a king, queen and jack (of the same suite) will likely wait for an ace and a ten to achieve a royal flush. However, they will also realise that the chances of obtaining such cards depend upon what others may be holding. Be patient and take your time. There is no doubt that you will soon learn to incorporate these hands into your overall strategy.